Between 2000 and 2007, Vendée Naissain and France Naissain enjoyed very rapid growth, necessitating a significant increase in personnel and structures.

In order to maintain the same degree of rigour with respect to our products (selected oyster spat), processes and customer satisfaction, in October 2006, the Management decided to recruit a Quality Manager. The idea behind this newly created function was to perpetuate the Quality Culture, already firmly established within the company.

The Quality Manager spent 18 months familiarising himself with the company, working across all the departments in order to gain a thorough understanding of the various activities and get to know the personnel.

The quality approach "placing the customer at the heart of the company" thus emerged at the start of 2008. The introduction of an ISO 9001 standard seemed to be appropriate to the ambitions of the company's Management. This standard was intended to ensure customer requirements were incorporated into every stage of the oyster spat production and marketing process. Moreover, it was established at a time when the oyster sector was in crisis . While this delayed its introduction, it did mean that all the problems encountered could be mitigated, ultimately further increasing the relevance of the Quality System. 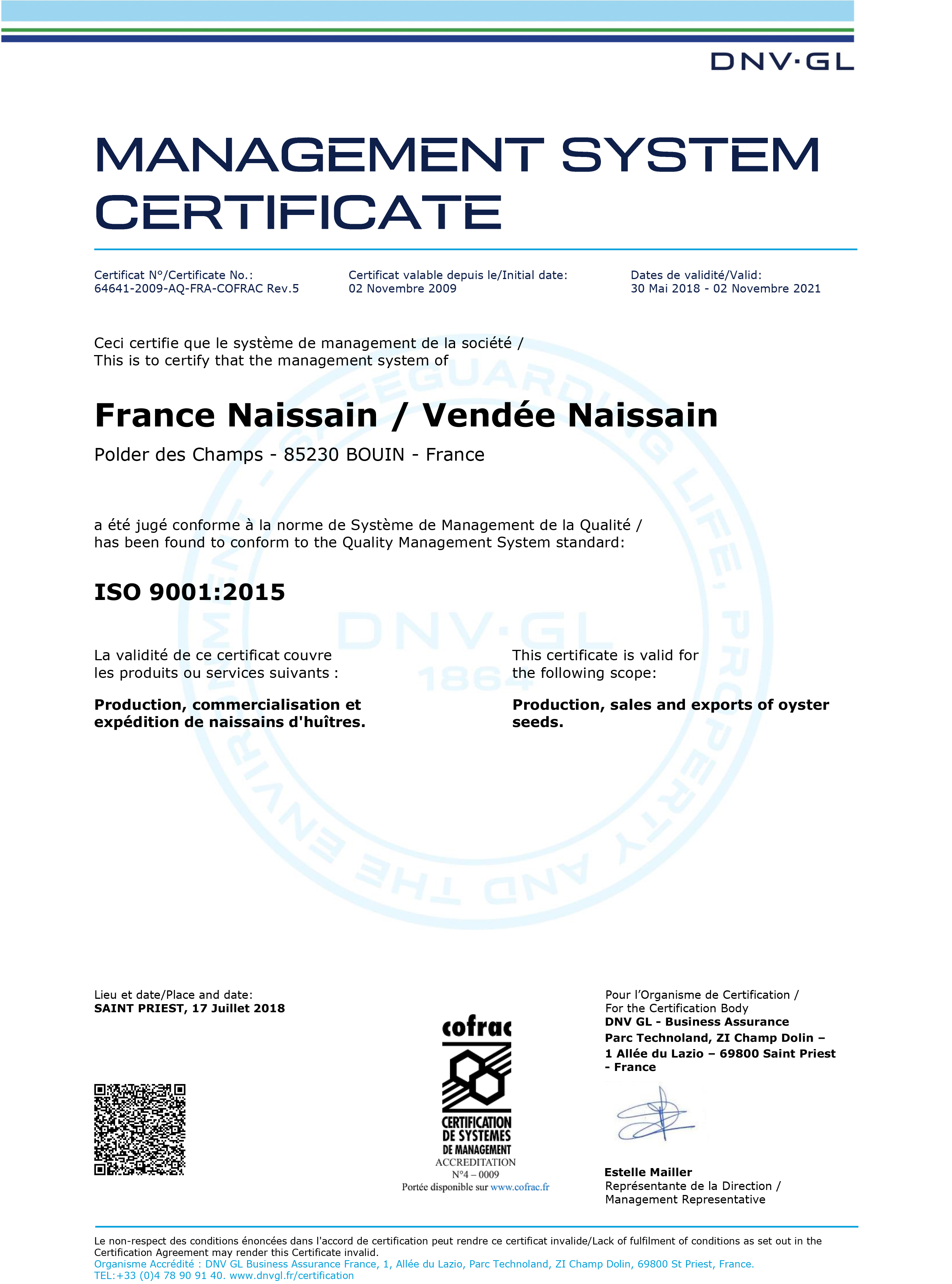 The process of setting up the system was a long one (mobilising all of the company's personnel from March 2008 to October 2009), culminating in an audit conducted by an auditor from DNV, the certification body, on 13 and 14 October 2009.

And in November 2009, Vendée Naissain and France Naissain were both awarded ISO 9001 Version 2008 certification. The scope of the standard is as follows : "The production, marketing, shipping and export of diploid and triploid cupped oyster spat".

The auditor singled out two areas worthy of praise, a rarity for an initial audit:

On 18 and 19 October 2010, an auditor from DNV carried out the first periodic audit. The audit did not identify any discrepancies between the standard and the company's quality system. Moreover, two further areas were singled out for praise:

The added value of ISO 9001 certification has exceeded our expectations :

Vendée Naissain and France Naissain are certified for a period of three years with annual control audits.

The initial certification obtained in 2009 was renewed in 2010 and 2011 following periodic audits (annual audits conducted by the certification body over the course of a 3-year certification cycle. At the end of this cycle, a new cycle of audits to be carried out by DNV began with a view to maintaining the certification).

In March 2017, the Vendée Naissain and France Naissain companies are ISO 9001 certified on the new version of the Norm : the 2015 version. It imposes in particular :

In addition to the audits carried out by DNV with a view to securing and maintaining ISO 9001 certification, every production and marketing process is audited on two further occasions each year:

Securing certification is just one step. We strive on a daily basis to ensure standards are maintained and improved, with one objective in mind : keeping our customers satisfied.

In keeping with our concern for the quality of our products, France NAISSAIN and VENDÉE NAISSAIN obtain Organic Farming Certification for a part of their production and distribution of nursery's diploïd spat.

Those organics farms answer to precise requirements specification in terms of well-being and respect for the animal.