The oyster goes through various stages of development before reaching its adult size. Supported by the expertise of our Research and Development department, we study and optimise this life cycle in order to obtain high-quality oyster spat.

Illustration of the oyster life cycle 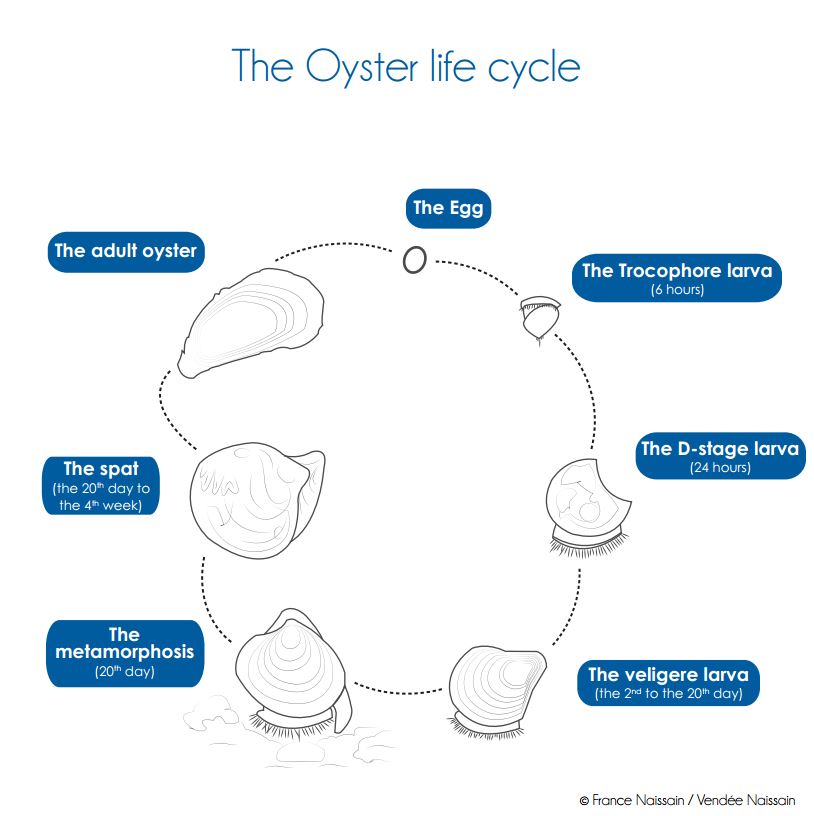 The Trocophore larva is a ciliated larva, which moves by creating a water eddy with its cilia. This is the first oyster larva. It is pelagic (lives in the open water).

The D-stage larva is so called due to its distinctive shape: it looks like the capital letter D. This "D" corresponds to the future oyster shell. It will act as the guide for the shell that will form around it. It still has cilia, but it has now acquired a velum to help it move around. This velum will be fully formed in the veliger larva (the next stage in its cycle).

The veliger larva remains pelagic. The cilia and the velum (which becomes fully formed at this stage) enable it to move through the water. The actual shell begins to form, as well as the hinge which will allow the adult oyster to open and close its valves.

The pediveliger larva is the last stage prior to becoming benthic (living on the sea bed). During this stage, the larva develops a foot as well as a pigmented eye spot on its shell (eyed larva). This spot signals the start of metamorphosis, a two-stage process:

Following this metamorphosis, the larva becomes a micro-spat, then a spat.

The spat spends around two and a half years growing before it reaches its adult size. This adult oyster is then ready for market.